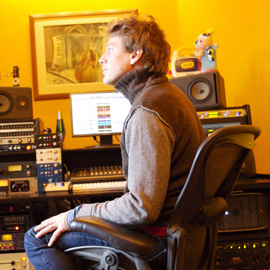 Studio Owner/ Producer/ Engineer/ Mixer
Kieran was born in the French Quarter in New Orleans, and raised in Flint, Michigan. He was deeply influenced by his music-loving parents throughout his childhood. Kieran’s mother owned an independent record store specializing in Punk and New Wave music, his musician father had six-year old Kieran filling in the drummer position in his impromptu jam sessions on a regular basis. Through this he was exposed to an eclectic range of music from Cole Porter, Stevie Wonder, Frank Sinatra, to the Rolling Stones, which would leave a lasting impression. Kieran in addition to owning The Buddy Project is a staff producer at Rabadash Studios in New Orleans. Some of the albums created at The Buddy Project include Sufjan Steven’s “Illinoise”, Julia Stone’s “The Memory Machine”, Farryl Purkiss’s “Home” and Angus & Julia Stone’s “Down The Way” Kieran has earned Multi Platinum records in Australia , France (Angus & Julia Stone’s “Down The Way”) and New Zealand (Midnight Youth’s “The Brave Don’t Run”) and a Gold Record in the U.S. (Better Than Ezra’s “Friction Baby”). He produced, mixed and engineered original recordings that have appeared on ABC, NBC, CBS, FX, MTV, Showtime, The Sundance Channel and NPR. In 2007 Kieran was invited to speak in front of Congress representing independent labels in the congressional hearing for web radio royalties. He has designed sound for The Museum of Art and Design in Manhattan. Kieran’s production and mixing for Angus and Julia Stone’s “Down The Way” in 2010 won 8 Australian ARIA awards. In 2014 he produced Farryl Purkiss’ album “Home” which was nominated for a South African SAMA award. 2015 had Kieran working on both sides of the globe producing Dutch duo Vonder And Bloom’s ” Follow You Back Home” as well as Melbourne Australia’s Hollow Drums forth coming debut. 2016 Saw “Cosmos” For Peruvian Rocker Pipe Villran named Rock Album of the Year by Peru’s La Republica. Kieran Proudly Endorses Eisen Audio Pre Amps Tul Microphones As a Producer Kieran is exclusively represented by Steven Scharf for Steven Scharf Entertainment Contact Here.